Re: InvalidOperationException: There is already an open DataReader associated with this Command which...

This issue is reproducible in Results to Data Grids mode.

You can solve this by iterating the IEnumerable manually, to make sure each reader is executed once during execution.

Re: Is it possible to get a SQL parser in LINQPad 5?

You should be able to run SQL queries directly (also includes syntax highlighting). No autocomplete/intellisense-ish functionality however. Change the language of the query to SQL.

I also want that, LPRun6 on Linux, UI is not required.

Re: Why is there no set Class on Controls?

Isn't that what the Styles property does?

Re: VS Code Notebook API

Within VS Code, I see LINQPad features as "visualizers" in a notebook. So for a .NET interactive kernel, it would be great to have some of those features available.

I would rather see LINQPad implement a version of notebooks. I often write scripts with the intent to share with others to simply run. And with notebooks, could make that all much more user friendly.

Re: Price of upgraded license upgrade to V7 is higher than non-upgraded version?

You probably purchased B more recently than A. If you purchase a license relatively close to an upgrade becoming available, a bigger discount is applied.

Re: Change display delay (in Dumpcontainer) between each step of a loop in real time

Given that your query is synchronous, you must set the IsMultithreaded property on the buttons to true if you want their click events to fire while the query is still running. Keep in mind that event handlers will fire on separate threads.

If this doesn't fix it, please post the code for a minimum repro.

I'm trying to add two nuget packages from my private nuget feed on MSTS. I can login and get the packages listed, but as soon as I click add to query I get this error 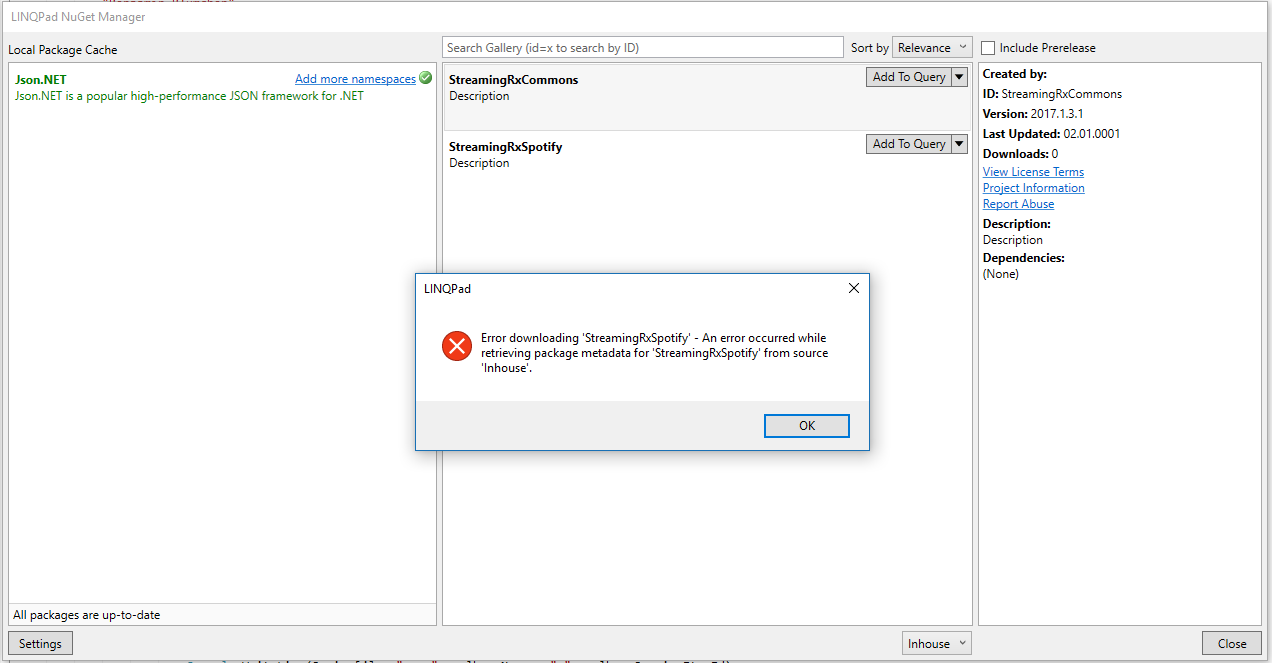 I checked the log but there was no additional information.

Re: Is LINQPad worth it?

I have been using it for at least 12 years and it has definitely been money well spent and definitely recommended.

I have currently over 1900 linq files that I have decided to keep on my machine and probably as many more one-off queries that I have not kept and others than I have written when connected to remote machines.

The vast majority of these are using the automatic Linq to Sql connection, but some are using a pre-built Linq2sql or EntityFramework data context models and others connecting to SqLite databases and even csv and json files.

There are also some queries that don't have any data connection at all. At the moment I am working on some code which connects to a webservice using an api and I am prototyping this in LinqPad where it is a lot easier to dump out the json results.

I have another script which I use at home which connects to a spreadsheet in google drive and downloads some information and syncs this to a Trello board all using their apis. It could all be doing in Visual Studio, but is ten times easier in LinqPad and because this is just for myself, it will probably stay as a LinqPad script.

Also the formatting you get from Dump / CreateXhtmlWriter is probably worth the money on its own. Some much so, that I have referenced LinqPad.exe in some of my projects in order to use it.

If your database structure does not have foreign key constraints for its foreign keys, then writing queries will be a lot harder. I have had to extract information from an un-documented sql database with no FK's and it wasn't pleasant. However, this is a feature of the model not the database at run-time, so if you have a pre-defined model that does specify the relationships between the tables then this disadvantage dis-appears.