This is about SQL formatted code.
I am using LINQPad 5 Premium Edition v5.43.00
In older versions of LINQPad this used to work for me when I wanted to comment a portion of the code:
I selected the lines, pressed TAB, then pressed CTRL+K+C.
When I pressed the TAB, it indented the section with 1 TAB for each line, and after I pressed CTRL+K+C, it added double dashes in the beginning of those lines, and I was able to run the code ignoring those lines.
But after a recent update, when you press CTRL+K+C, it inserts the double dashes right before the text in those lines, not in the beginning of the lines, so when you try to run it, it gives you an error. I need to manually go to each line and insert spaces after the double dashes and before the text in those lines to separate them.
For example:

In earlier version of LINQPad after TAB, CTRL+K+C it looked like this and ran fine: 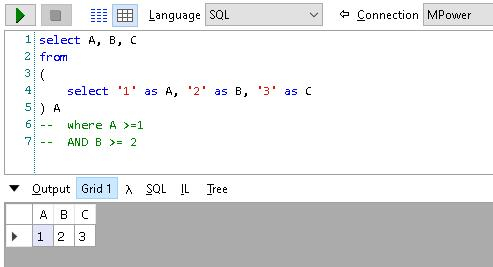 It's quite annoying when I need to comment out a longer block of code and I need to edit every single line manually.
Can you please fix it as it was in a previous version? Or is there any other shortcut that would comment a block of text? If would be nice to just use CTRL + slash.